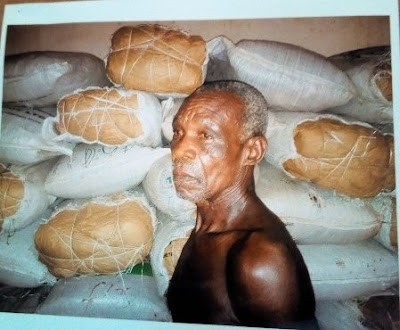 A 64-year-old grandfather, Daniel Idemudia, has been arrested in Benin, by the Edo State Command of the National Drug Law Enforcement Agency (NDLEA), in connection with the discovery of substance suspected to be cannabis sativa in a warehouse where the old man resides.
The State Commander of NDLEA, Mr. Buba Wakawa, said a total of 5,650 kgs of dried weeds suspected to be the banned substance, were found in two warehouses. The first warehouse is a residential house located behind Tipper Garage, Egor, Egor Local Government Area, where 280 sacks of the dried weeds weighing 4,200 kg while the second warehouse is located at Ugwella-Gidi village, Ovia South West Local Government Area, where 245 sacks of dried weeds weighing 1,450 kgs were recovered.

According to Wakawa, the exhibits at the Egor warehouse were hidden inside the ceiling of a bungalow, where a 64-year-old grandfather, Daniel Idemudia who resides in the warehouse was arrested.

“We were shocked to discover 280 sacks of dried weeds suspected to be cannabis sativa all hidden inside the ceiling of the building. This discovery will serve as a warning to others that their warehouses will be discovered and the drugs seized,” he said.

When interrogated, the old man who gave his name as Pa Daniel Idemudia, admitted knowledge of the exhibits found inside ceiling in his house.

“A friend of mine kept the cannabis inside the ceiling of my house. The house was built by my son who resides in Europe. He promised to handsomely reward me after selling the drugs,” he said
The NDLEA Commander vowed to arrest other members of the drug syndicate.
Enjoy Reading And
Kindly drop your comment