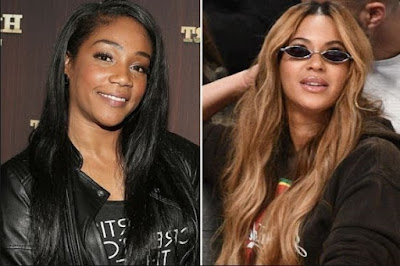 The much talked Beyoncé biter scandal has finally been put to rest.
Comedienne Tiffany Hadish who revealed in a recent interview with GQ, that an actress bit Beyoncé on the face, has now disclosed why she will never let the world know the identity of the culprit.
The 38-year-old Girls Trip actress went live on Instagram and revealed she had signed a Nondisclosure Agreement preventing her from giving the name.

In her words, she said: "Look, once you sign an NDA, see if you all would've asked me this, you know, back when I did the interview...like a month and a half ago before [I could've talked about who the biter is but], you know, NDAs are real, y’all. NDAs are real so I’m not saying shit about nothing."
She also urged fans to focus on the real news, saying who bit Beyonce is not the real news.
“People should be focusing on the real issues at hand, like did you do your taxes,” she said. “’Cause taxes is due real soon. Can your children, do they know how to read and write? Have you been working with on them their reading and their writing? Like, is your house clean? That’s what we need to be focusing on. But y’all wanna know...everybody going crazy about who bit Beyoncé.”
In the video, Tiffany also went ahead to joke that it was porn star Stormy Daniels who bit Beyonce.
Watch the video below.