2face Idibia regrets having all his kids from different women 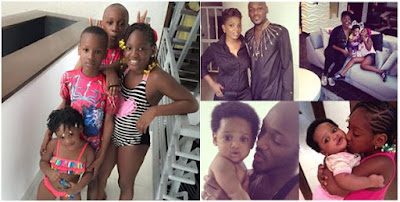 Nigeria music iconic, Innocent Ujah Idibia, aka Tuface, in this interview with PUNCH newspaper talks about his music, life and inspiration.
Tuface expresses his displeasure at having children from multiple women.
“It is really tough to talk about it. Honestly, when I look back and examine that aspect of my life, I wish it never happened. I wish all my kids came from one woman. I love my children and there is nothing I can do to change the situation . I have moved on and I am married to one of the women who bore me kids. I no longer dwell on that issue.”
His relationship with his children.
“I am not the strict type because I have a soft spot for kids. As such, my children always get away with so many things when I am around. Their mothers are the ones who discipline them. I pamper my kids,’’ he tells with delight in his voice.
Does it seem likely that any of his children would follow in his footsteps? He affirms this and adds that some of them are already exhibiting signs of taking up music as a career and rather than dissuade them, he is prepared to give them the encouragement they need to succeed.
When he is not making melodious music, the international act always takes a break from his hectic schedule to relax. For him, this comes in different forms he quips.
“Sometimes, I could just sleep but most times, I like to hang out with my friends. We laugh, gist, crack jokes and generally have fun,’’ he says.
Commenting on the motivators in his life, Tuface says that one of the things he strongly believes in is the fact that the sky is big enough for everyone to fly as there is adequate space. He continues:
“It is just like the millions of stars that you see in the sky at night. Notwithstanding their number, there would still be space for more stars to shine. That is life and nature at work, so there is space for all of us. I always say that nobody should think that he or she is luckier than everyone else in life because that is a farce. As an individual, do not think that there is no space for the next person to thrive. For me, that is how I see life.’’
Even though he dropped out of school many years ago, he reiterates that in spite of his itinerary as an international musician, he looks forward to a time when he would be able to go back to earn a university degree. In a pitch that shows sincerity, he says,
“Maybe I’d give it a thought once again. I am going to keep trying and I would never give up on education.’’
His role models he says must not necessarily be musicians. He argues,
“They are people from different professions and surprisingly music is not one of them . I look up to many people and I do so for countless reasons.”
Still speaking, he says Senator Ben Murray-Bruce, Richard Mofe-Damijo and comedian, Ali Baba stand out for him and the reason is not farfetched. In a revealing tone, he enumerates some of the reasons why he regards them so.
“These are people who have remained on top of their game in their respective fields of endeavour and they are doing very well so I have tremendous respect for them. For instance, take a look at Ali Baba, he is a very humble man, yet he is on top of his game as a comedian and I always strive to do same,’’ he states.
Tuface is not exactly a trendsetter yet he manages to keep it simple and sharp even though he is not proficient at fashion as he is at music. In describing his style, he keeps it brief.
“Nothing in particular determines what I wear . I just like to dress in clean clothes and also look sharp when I go out,” he explains.
He sums up his philosophy about life in just one short sentence, ‘Live and let live’ and adds that he just wants to be remembered as that guy that came to the world to do his thing and also allowed others do their own thing, all in the spirit of one love.
Having weathered several storms in his career, Tuface has a word of advice for up-and-coming artistes.
“I just want them to know that going into music is serious business. More so, they should challenge themselves creatively and be able to explore all avenues. They must not be held back by any challenges that may come their way. When they combine all of these together, the road would be easy. On my part, I am just going to keep doing good music and keep bonding with my family. For me, I am just doing my own thing so I am not in competition with anyone. I am on my own lane and wouldn’t have it any other way,’’ he concludes.
Tags : ENTERTAINMENT
Share This :