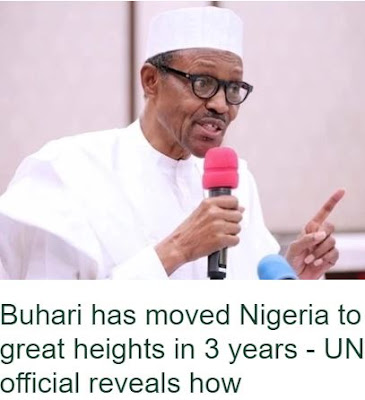 - Itegboje disclosed that although the presidency is shy in publicising its achievements, they are obvious to Nigerians

- He remarked that the president met a recessed economy and rescued it
Ambassador Samson Itegboje, a permanent representative to the UN, recently said that Nigeria has moved forward under the President Muhammadu Buhari-led administration, in spite of the huge challenges it inherited. Itegboje made this known during a town hall forum organised by the Nigerian Embassy in Washington, DC and the Nigerians in Diaspora Organisation (NIDO) US. The theme of the forum is: The strength and voice of the Nigerian Diaspora, the News Agency of Nigeria (NAN) reports.
The envoy, however, said that the Buhari’s administration had been shy in publicising some of its achievements for the citizens to be properly informed. Itegboje remarked: “We are witnesses to the fact that prior to the coming of the government of President Buhari, the economy was almost grinding to a halt. In fact, President Muhammadu inherited a recessed economy waiting to happen. “Boko Haram was running riots in the country and has even held sway in 14 local governments in Borno. Corruption had almost become normal and our infrastructure had decayed among others. But this government went to work and I must confess that the government appears to be publicity shy.’’
He reeled out some of the successes achieved so far in less than three years of the current administration, saying they are subject to verification. He said: “It takes three years for a country to exit recession but it took this government less than one years and a half to exit recession. Foreign reserves have peaked at about 43 billion dollars, the highest level in about four years and up from 24 billion dollars just a year ago.’’ He said the implementation of the Treasury Single Account (TSA) had stopped the haemorrhaging of the Treasury, adding that N108 billion had been saved from the removal of maintenance fees payable to banks pre-TSA.
Itegboje also stated: “Nigeria rose 24 places on the World Bank’s Ease of Doing Business Ranking and earned a place on the list of 10 top performers in the world. According to third quarter 2017 figure, agriculture export is up year-on-year by 25 per cent while solid minerals export is up year-on-year by 78 per cent."
Meanwhile, The Source reported that the governor of Ondo state, Rotimi Akeredolu, had said that the state and its people were satisfied with the numerous achievements of the president's administration.