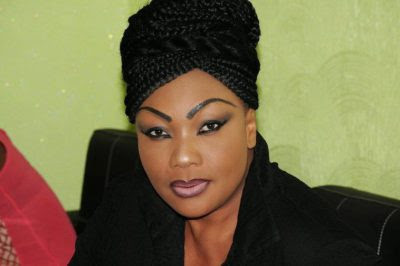 Eucharia Anunobi shot into limelight when she featured in the popular movie of the early 90’s, Glamour Girls
The movie got many talking at that time especially for the famous bathroom scene where she was topless and frolicking with fellow actor, Zack Orji.

Over the years, the actress has grown to become one of the top actresses in Nollywood. However, her career recently took a drastic turn when she went into ministry and became an evangelist.

Anunobi has also had a couple of setbacks in her personal life. A few years ago, she had to go through a painful divorce and not too long after, her only son died due to complications from sickle cell anemia.

Early Life
Anunobi was born on the 25th of May 1965. She was born in Owerri, Imo State and had her primary and secondary education in the state before she moved to Enugu for her University education at the Institute of Management Technology, Enugu.

The actress bagged a National Diploma in Mass Communication at IMT. Anunobi also holds a Bachelor of Arts Degree from the University of Nigeria where she studied English Language.

Movies
The movies that shot Anunobi into reckoning as a top actress were Glamour Girls and Abuja Connection.

Marriage
Anunobi got married to Charles Ekwu in December 2000 and they had a child together. The boy, Raymond Ekwu was born in 2002 but he died in 2017 at the age of 15 from complications due to sickle cell anemia.

According to Anunobi, Raymond died due to a mistake by his doctor although she didn’t reveal the details of the error.

His funeral was attended by the likes of Omoni Oboli, Ebele Okaro, Monalisa Chinda and many other Nollywood celebrities.

Interestingly, her ex-husband was conspicuously absent at their son’s funeral.

Divorce
In the divorce suit, Anunobi demanded a N100 million divorce settlement from her husband on the grounds of abandonment, irresponsibility and cheating.

She filed the suit in 2007. There were allegations that Charles slept with their 13 year old housemaid in 2006. She also claimed that he used to beat her frequently and was very irresponsible and didn’t contribute to their son’s upbringing.

Ministry
The actress became born again a few years ago and she is currently serving as an associate pastor and an evangelist at the Fresh Oil Ministry International Church in Egbeda, Lagos.

Ideal Man
Anunobi revealed that she would like to marry a tall, black and handsome man. She also disclosed that her future husband must have the Spirit of God and Christ as his backbone.

Tinsel
The actress recently joined the cast of Tinsel. Anunobi is the latest addition to the M-Net production. She plays the role of Claudia Ojeme, the wife of Japheth Ojeme and mother to Jared. Her character is aimed at making her son give up of his passion of becoming a professional biker.

Tinsel is a highly rated drama series which began airing in August 2008
Tags : BIOGRAPHIES
Share This :