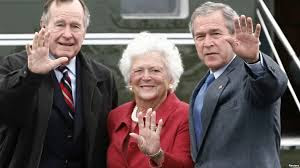 “A former first lady of the United States of America and relentless proponent of family literacy, Barbara Pierce Bush passed away Tuesday, April 17, 2018, at the age of 92,” reads a statement from the office of former President George H.W. Bush.
Mrs. Bush served as the country’s first lady from 1989 to 1993. She passed away shortly after deciding to forgo further medical treatments for her failing health. Having been hospitalized numerous times while battling congestive heart failure and chronic obstructive pulmonary disease, she decided Sunday that she wanted to be “surrounded by a family she adores,” according to an earlier statement released by Mr. Bush’s office.
“It will not surprise those who know her that Barbara Bush has been a rock in the face of her failing health, worrying not for herself — thanks to her abiding faith — but for others,” the statement continued. “She is surrounded by a family she adores and appreciates the many kind messages and especially the prayers she is receiving.” In January 2017, Mrs. Bush and her husband were hospitalized at the same time. She was being treated for bronchitis and the nation’s 41st president was being treated for pneumonia.
Mrs. Bush is one of only two first ladies in the history of the country who is also the mother of a president. Abigail Adams, the wife of John Adams, a founding father of the nation and its second president, was the mother of John Quincy Adams, the sixth U.S. president.
Mrs. Bush is the mother of George W. Bush, the 43rd president of the United States, and Jeb Bush, the former governor of Florida who ran for president of the United States in 2016.
During her tenure as the nation’s first lady, Mrs. Bush, the mother of six children, was a champion for global literacy and continued the work after she and her husband left the White House. In 1989, she formed the Barbara Bush Foundation for Family Literacy, which encourages parents to read to their children.
“Literacy fits in with so many other things,” she once told The Chicago Tribune. “If more people could read, fewer people would have AIDS. There would be less homelessness. I’m absolutely convinced of that.”
Descendent of a president
Barbara Pierce Bush was born in New York City, New York, on June 8, 1925, to Marvin and Pauline Pierce. Her father, a magazine publishing executive, was a descendant of Franklin Pierce, a Democrat and the nation’s 14th U.S. president who served from 1853 to 1857. Her mother was the daughter of an Ohio Supreme Court justice and was active in civic causes.
The third of four children, Bush later recalled a childhood where her parents would gather and read around the fireplace, fostering her early love of reading. She graduated high school from the all-girls private Ashley Hall boarding school in Charleston, South Carolina, in the early 1940s and enrolled in Smith College, a women’s college in Northampton, Massachusetts. At Smith, which was racially integrated, Mrs. Bush became captain of the freshman soccer team, but she dropped out of college in 1945 at the beginning of her sophomore year. She later admitted that she was more interested in her future husband than in her studies.
She had met George Herbert Walker Bush at age 16, while at a Christmastime dance at the Round Hill Country Club in Greenwich, Connecticut. The pair were immediately attracted to each other and began exchanging letters, even as Mr. Bush completed his training to become the then-youngest pilot in the Navy. He named his bomber plane “Barbara” in her honor. The pair were engaged shortly before Mr. Bush left to fly in World War II, and they wed Jan. 6, 1945, while he was on leave.
Mr. and Mrs. Bush celebrated their 73rd wedding anniversary on Jan. 6. In an alumni magazine from Smith College, Mrs. Bush said the marriage has endured because of the couple’s love for each other. “I am still old and still in love with the man I married 72 years ago,” she said in the interview published in “Smith Alumnae Quarterly” earlier this month.
“George Bush has given me the world,” she also said in the magazine. “He is the best — thoughtful and loving.”
Source:- CNN
Tags : NEWS
Share This :