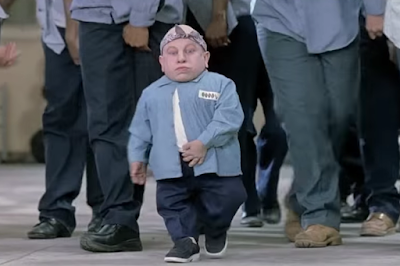 Mini-me actor and comedian, Verne Troyer was rushed to the hospital for a 'reported poisoning' on Monday night.
According to TMZ, a friend of Verne's made the call around 7:30 PM, and described him as being extremely upset, drunk and suicidal.

Los Angeles Police and the City Fire Department rushed to Verne's North Hollywood home around 8:34 p.m after getting the report. He was transported to a hospital for possible alcohol poisoning.

It was also reported that a psychiatric evaluation was done and the actor, 49, was placed on an involuntary psychiatric hold.

Law enforcement sources told TMZ that Troyer was “extremely upset, drunk and suicidal.” The outlet also reported that he is being held for 72 hours for evaluation.

It could also be recalled that the 'Powers star' actor who nearly died of alcohol poisoning in 2002, battled addiction for years. He was hospitalized for alcohol addiction in April 2017, and spent two weeks in a San Fernando Valley hospital before checking into a rehab facility.
Tags : NEWS
Share This :