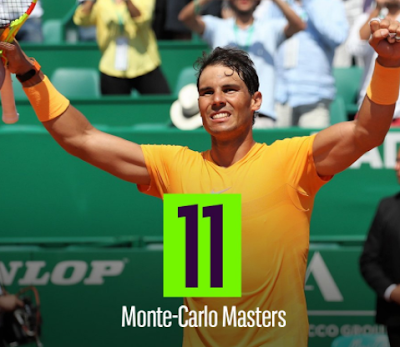 Rafa Nadal won a record-extending 11th Monte Carlo title with a 6-3 6-2 thrashing of Japan’s Kei Nishikori in the final on Sunday.

Nadal, who is also targeting an 11th Roland Garros trophy this year, extended his run of consecutive sets won on clay to 36 after recording the win in an hour and 33 minutes.

His opponent Nishikori, who missed a large part of last season with a wrist injury, grabbed an early break in the Monaco sunshine before his 31-year-old opponent won four games in a row to take control of the match. Nadal took the opening set with a blistering forehand and went on to convert two breakpoint opportunities in the second to lift the title.
Tags : SPORTS
Share This :