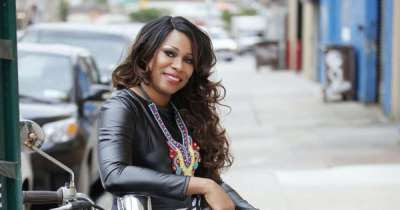 Regina Askia-Williams is a former beauty queen and actress. She used to be a prominent face in the Nigerian movie scene in the 90s until she relocated to America several years later. She featured in movies like Most Wanted, the President’s Daughter and Slave Warrior.

The former actress has since gone on to establish herself as a registered nurse in America where she’s also married with kids.

In this post, we take a look at her life, her career as an actress as well as a current life as a nurse in the United States.

Education
Askia was enrolled in the University of Calabar but transferred to the University of Lagos where she won the Miss UNILAG Beauty Pageant. That same year, she competed in other pageants which included the MBGN 1988 and Miss Intercontinental Pageant. She emerged the second runner up at the MBGN contest. However she became the title holder when Bianca Onoh resigned.

Askia graduated from UNILAG with a Bachelor’s degree in Biology.

Career
Askia is currently based in the United States of America where she’s a registered nurse. The former actress is also a healthcare and educational activist.

Prior to moving to America, Askia was an actress, television producer and writer.

After her time as a pageant winner, she began modelling and she appeared in several Nigerian print and television commercials including Kessingsheen Hair Care, Collectibles, and most famously, Visine.

Askia also appeared on several runway shows. In 2007, she modelled for the 2000-N-Six face cleansing range alongside her daughter, Stephanie Hornecker.

In 2005, Askia hosted a fashion show at the Nigerian Embassy in New York City. The objective of the show was to raise awareness on the plight of children’s social amenities in Nigeria. In 2006, she hosted a charity fashion show at Lehman College in the Bronx, New York, which displayed the creations of top African designers and her own label Regine Fashions.

Few years after her beauty pageant, Askia broke into the acting industry. She starred in the Nigerian TV series, Fortunes in 1993 where she played the role of the gold-digger Tokunbo Johnson.

It was her role in Nollywood that earned her accolades and awards.

The actress also produced several television shows and movies in the 90’s and early 2000. She featured in scores of Nollywood movies during this period.

At a time, Askia was being compared to Elizabeth Taylor due to her fantastic acting and fame. She was one of the highest paid actresses during her time in the industry.

In the early 2000, Askia relocated to America where she went on to enrol in the medical school to become a nurse.

In 2007, Askia-Williams was given an award by the Celebrating African Motherhood Organization (CAM) at a gala event in Washington, D.C.

Despite her relocation to the United States of America, Askia has been involved in activities in Nigeria where supports several medical outreaches.

One of the projects she participated was the Rennaissance Network Africa which was an Afro-American Project.

The project involved Askia and 3 reputed doctors. The goal of the project was to bring back Africa’s glory by promoting business relationships between Africans and Americans of African origin.

The actress uses her medical missions and fashion shows to promote collaborations between Africa and the Diaspora.

Also, Askia is the co-host of the internet broadcast discussion program, African Health Dialogues. The program has covered topics like the effectivenes of mobile medical clinics in Africa. The former actress is also a prolific health writer. She is a contributor to the Saturday Clinic series in the Nigerian newspaper, This Day.

She has also been working towards reducing medical tourism. She recently visited the country and met with a team of professional nurses from different parts of Nigeria.

Askia and her team visited the Presidential Adviser on Foreign Affairs and Diaspora, Abike Dabiri in Abuja,

According to the former actress, she disclosed that skilled Nigerian nurses practicing abroad can collaborate with nurses locally to boost clinical health care delivery. This can be done through the introduction of nurses’ development programme.

Also, Askia highlighted the need for an adequate culturally sensitive campaign that would enlighten the Nigerian populace and enable them make intelligent choices in winning the HIV/AIDS battle.

The presidential adviser welcomed the visiting nurses and declared her support for their proposal to commence the Nurses Development Programme which she believed will serve as a form of contribution by Nigerians in the diaspora to the country’s development.

Personal Life
Askia is married to American Rudolph ‘Rudy’ Williams. He is the nephew of Ron Everette and grandson of Fess Williams. Their union has produced two children – daughter Teesa Olympia and son Rudolph Junior.

She has a daughter from her previous relationship. Her name is Stephanie Hornecker and she’s a model.

Citizenship
Askia recently disclosed via a Facebook post that she’s now a citizen of the United States of America. Prior to becoming a green card holder, the former pageant winner had lived in America for 15 years.

Politics
There have been rumours that Askia is interested in venturing into politics in Nigeria but she’s yet to refute or endorse such claims.
Tags : BIOGRAPHIES
Share This :