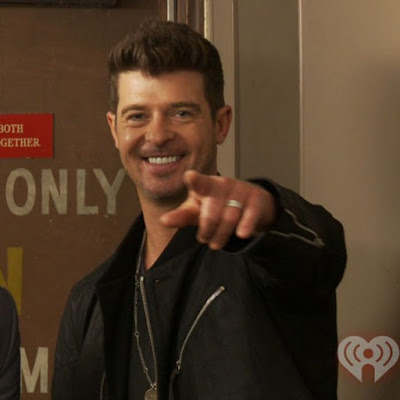 Currently 36 years old, Thicke is the son of actor Alan Thicke and actress Gloria Loring, hence, the taste of arts has been embedded in his genes. He was born in California but holds dual citizenship for his father being a Canadian. His elder brother, Brennan, use to work as a voice actor in the mid-1980. Thicke got married in 2005 and has a son, Julian Fuego Thicke, born April 6, 2010.

Before performing as a singer-songwriter, Thicke had already written a number of songs for 3T’s “Se*ual Attention”, Brandy’s eponymous album and some collaborations with Jordan Knight, Jimmy Jam and Terry Lewis in Knight’s 1999 album “Jordan Knight”. His co-written song, “Fall Again” with Walter Afanasieff became the track song of Michael Jackson’s 2001 album “Invincible”. These feats were prior to his entry in the singing field.

Thicke started to work on his debut album in 2000, which was eventually released in 2002 by the title of “When I Get You Alone”. This album’s song, “A Fifth Beethoven” video received remarkable appreciation on television, reaching at number 49 on Radio & Records Pop Chart. Thicke got into the lime light when his debut album went into the top-20 in Australia, Belgium and Italy, and in Top-10 of the singles charts in New Zealand, and the Top-3 in Netherlands.

After his huge success with the debut album, Thicke launched his next album, “A Beautiful World” in 2003 but it failed to match his earlier success, selling merely 63,000 copies in total.

His remix of Will Smith’s song “Switch” got immensely popular and he was resultantly signed for The Neptunes label, Star Trak, afterwards. His next album, “The Evolution of Robin Thick” came in October 2006, including the breakout hit song, “Lost without U”, which went up to number four on the Billboard Hot 100. Hit album sold more than 1.5 million copies domestically and received immense appreciation from all corners.

Thicke’s third solo album, “Something Else”, was launched on 30th September 2008 and it sold 140,000 copies in the very first week. Just after seven months of this album, Thicke announced that he will release his fourth album by the end of 2009, with the title of “Sex Therapy”. He further launched his solo albums, “Love After War” in 2011 and “Blurred Lines” in March this year.

Thicke has been a singer, mentor and judge on the ABC show, Duets, as well. The 36 year old American is also well acknowledged for his work in popular albums, such as “Confessions” and “The Carter III”. His latest album, “Blurred Lines”, is getting great response from the music lovers, receiving millions of views in days after release on Vevo.