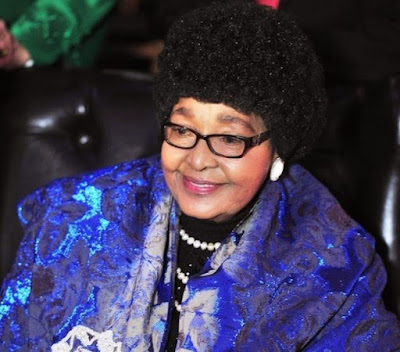 The South African government has announced a state funeral for Winnie Nomzamo Madikizela-Mandela, the anti-apartheid campaigner and former wife of the country’s first black president, Nelson Mandela.
“Freedom fighter Winnie Nomzamo Madikizela-Mandela will be laid to rest on 14 April 2018, during a state funeral,” a government statement read.
Ahead of the funeral, an official memorial service of Madikizela-Mandela will take place on 11 April 2018. President Cyril Ramaphosa made the announcement on Monday night after visiting the family home of the former activist in Orlando, Soweto.

“At a national government level, we have declared that Winnie Mandela will have a national official funeral. We would like to express our gratitude and our thanks to the many across the country and the world who are wishing us well,” said President Ramaphosa.

In a televised tribute, Mr. Ramaphosa described Madikizela-Mandela a “champion of justice and equality” whose “dedication to the plight of her people gained her the love and the respect of the nation”.
“For many years‚ she bore the brunt of the senseless brutality of the apartheid state with stoicism and fortitude,” he said. “Despite the hardship she faced‚ she never doubted that the struggle for freedom and democracy would triumph and succeed.

“She remained throughout her life a tireless advocate for the dispossessed and the marginalised. She was the voice for the voiceless.”
The late Winnie who was married to Mandela for 38-years died on Monday at the age of 81 following a “long illnes
Tags : NEWS
Share This :