Breaking News:
Loading...
Home › ENTERTAINMENT › YOUR VIEW!!! Igbo or Yoruba? Which Tribe Has The Best Indigenous Rappers In Nigeria?

YOUR VIEW!!! Igbo or Yoruba? Which Tribe Has The Best Indigenous Rappers In Nigeria? 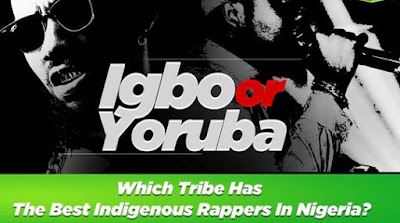 You cannot appreciate the beauty of rap music, if you’ve not listen to it when it’s done in your local language. This is why I think Indigenous rappers are making it big in the industry when compared with their colleagues with American grammar kind of rap style. Yes! You can’t compare the success of Dagrin when he was still alive with that of M.I.

When you combine the success of Naeto C (Where is he self), M.I, Vector, and Mode 9 together, they are still no match with Olamide’s success story not to talk of Phyno.

In Nigeria today, Yoruba and Igbo are the most flourishing tribe when it comes to indigenous rap game. The legendary Dagrin exposed the beauty of Yoruba language with his well-crafted indigenous lyrics. After his demise Olamide, Reminisce and others stood up to give Yoruba rap more deserving recognition by dropping back-to-back hits every year.

Apart from Olamide and Reminsce, Yoruba rap is also blessed with fast rising talents like; Lil-kesh, Chinko Ekun, Ola Dips,Wale Turner among others.

As we all know, our Igbo boys “dem no dey carry last”. Apparently, the Igbo boys will at every opportunity uplift their identity, most especially their language. In the days of Enugu born Igbo Rapper, Nigga Raw, Igbo rap enjoyed massive national recognition. His lyrics are unique with amazing rhyme schemes. Today we have the likes of Phyno, Illbliss, Zoro, and others taking over the Igbo Rap game.
Meanwhile, it is safe to conclude that Phyno is now the King of Igbo rap, but one cannot underestimate the efforts of Olamide in Phyno’s success. Phyno actually used Olamide to present himself as an Igbo Indigenous rapper while Olamide is already the king of Yoruba rap.

Let’s have your own view on this? “Between Igbo & Yoruba Who Has The Best Indigenous Rapper In Nigeria” ?