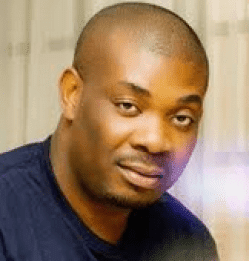 If this phrase, ‘It’s Don Jazzy again’ rings a bell, then you’ve obviously heard one of the songs produced by the famous Nigerian producer, Don Jazzy.

Don Jazzy is the founder of the defunct record label Mo’ Hits Records and the current owner of the Mavin Records which he established on the 8th of May, 2012. This came after the producer parted ways with his longtime friend and partner, D’Banj.

Early life
Don Jazzy was born in Lagos State. He spent his early years in Ajegunle where he lived with his family.

Education
Don Jazzy attended the Federal Government College Lagos. At a young age, his interest in music was evident as a result he began learning how to use traditional and percussion instruments.

The producer enrolled at the Ambrose Alli University, Ekpoma, Edo State where he obtained a degree in Business Management Studies.

Career
In 2000, Ajereh visited London and his uncle invited him to play the drums for his local church. The producer would later take his exposure a step further when he decided to hone his production skills with Emeka Infiniti at O-Town Record Company.

Subsequently, the producer teamed up with the JJC and 419 Squad in London

He produced some of the songs from their album and it was when he was with the group that he met D’banj.

In 2004, Don Jazzy collaborated with D’Banj to found Mo’ Hits Records. Over the next few years, the duo worked together producing hits after hits. Don Jazzy produced the albums, No Long Thing and Rundown/Funk You Up and Curriculum Vitae, and the Entertainer.

Don Jazzy was also responsible for the rise of Wande Coal. The artist was signed on to Mo Hits and the producer was responsible for his Mushin 2 Mo Hits which amassed several awards after its release.

The producer has also been involved in giving background vocals to his artists. He has performed excellent vocals for the likes of D’Banj, Sauce Kid, Dr SID, Ikechukwu, Kween, D’Prince, Tiwa Savage and Iyanya.

He is also credited with providing vocal performance for Kanye West’s song, Lift Off with Beyonce.

In 2011, Don Jazzy collaborated with Kanye West and was involved in some productions works at Very Good Beatz. Kanye West also made a surprise appearance at the Koko Concert in London.

But in 2012, Don Jazzy and D’Banj abandoned their partnership when the latter decided to relocated to America but Don Jazzy was unwilling.

Mavin Records
Following the end of his partnership with D’Banj, Don Jazzy set up a new record label, Mavin Records. Subsequently, he released an album featuring the artists signed on to his label with the likes of Tiwa Savage, D’Prince and Wande Coal.

Unfortunately, Wande Coal left the label in November 2013 after a disagreement with Don Jazzy.

Don Jazzy would later sign on the likes of Korede Bello, Reekado Banks and Di’Ja.

Controversy
In 2015, following the Next Rated Award which was given to Reekado Banks, Don Jazzy was involved in argument with Olamide who expected his protégé, Lil Kesh to win the award. However, both sides eventually resolved their difference.

Endorsement
Don Jazzy signed an endorsement deal with Samsung when they launched their Built for Africa campaign. The deal came not too long Don Jazzy ended his partnership with D’banj when the later decided to relocate to America to expand his music career.

Movies
In 2012, Don Jazzy appeared in the movie, The Last 3 Digits. The movie was produced by Moses Inwang and featured the likes of Ali Baba, A.Y., Nonso Diobi and Dr. Sid.


Albums & Hits
Below are some of the albums and hit songs produced by Don Jazzy over the last 12 years.

Albums
Hits
Don Jazzy first album was the one he produced for D’banj consist of 12 tracks with hit tracks like Tongolo while the second album had seventeen tracks including “Run Down,” “Do you Like the Koko,” “Iya Mi,” “Serve the Lord,” and “Tongolo.”

Personality
Don Jazzy has revealed several times that he is a very shy person and this probably explains why he’s often seen wearing sunshades.

According to him, he doesn’t like performing on stage but he doesn’t mind singing in the studio. The producer has also disclosed that once he releases a song he doesn’t go back to listen to it.

Business
Don Jazzy is an investor in Flo Byt, a tech startup that provides free WiFi service in Lagos. Don Jazzy also recently launched an oil and gas firm, Mavin Energy. According to the producer, he also has declared his interest in movie making which he is working on at the moment.

According to the producer, Mavins Energy will provide direct and convenient delivery of cost effective petroleum products to everyone, anywhere.
Tags : BIOGRAPHIES
Share This :