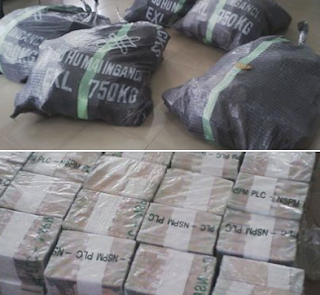 The Economic and Financial Crimes Commission, EFCC, Kaduna Zonal Office today, Thursday May 17th 2018, closed its defence in the N49 million civil matter with five others claiming ownership of the money which was intercepted at the Kaduna International Airport on the March 13, 2017.

Lead counsel to EFCC, Joshua Saidi informed Justice S. M Shuaibu of the Federal High Court Kaduna, that the Commission by presenting it's only witness had closed it's case.
In his testimony, DW1 identified his sworn affidavit and adopted same, while counsel to the five plaintiff, E. I Dapo didn't object to it's admissibility.

The Court further admitted a Certified True Copy of teller depositing the said sum in the custody of the CBN.

It would be recalled that operatives of the EFCC on the 13th of March, 2017 intercepted five 750kg bags filled with crispy naira notes at the Kaduna International Airport. Further investigation revealed that the bags contained a total sum of N49 million bound for Lagos.

Justice Shuaibu has adjourned the matter to the 28th of June, 2018 to allow for adoption of final written addresses and reply on points of l
Tags : NEWS
Share This :