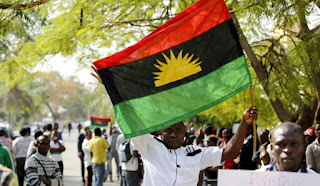 Members of the Biafra Zionists Federation, BZF, Wednesday morning made a futile attempt to take over Enugu Government House.
DAILY POST reports that the Zionists led their self-acclaimed President, Barr. Benjamin Onwuka stormed the Government House as early as 7 am with Biafra flags.

The group had earlier vowed to be at the Government House today, Wednesday May 30 for the purpose of declaration of Biafra Republic.

Our correspondent reports that upon their arrival at the Government House gate, they were rounded up by security operatives. They marched from the Bissala Road axis to the area.

A combined team of security operatives made up of the DSS, anti-terrorism squad, mobile policemen, SARS, among others carried out the operation.

DAILY POST learnt that Onwuka and about fifteen other members of the group were arrested, while others fled.