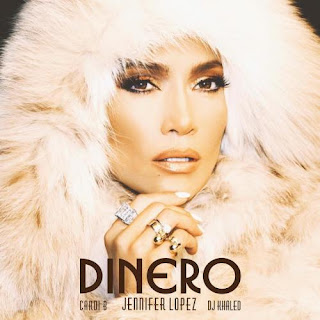 Jennifer Lopez Dinero
Jennifer Lopez debuts new track titled ‘Dinero’ featuring DJ Khaled & Cardi B. The song was first teased back in December, 2017 when J.Lo’s boyfriend, Baseball superstar Alex Rodriguez shared some footage from the studio session on Instagram.
Since then, the music video has been shot as well but fans were eagerly looking forward to the audio. The final product is here and the English-Spanish banger does not disappoint at all. Even Khaled’s part doesn’t interfere with the flow of the track, as some fans feared.
J. Lo’s last single, “Us” [ft. Skrillex], came out in February. Her last LP was 2014’s A.K.A. Cardi released her debut album Invasion of Privacy in April and DJ Khaled’s Grateful came out last June. J. Lo and Cardi B were recently named in TIME’s annual list of the 100 most influential people in the world.