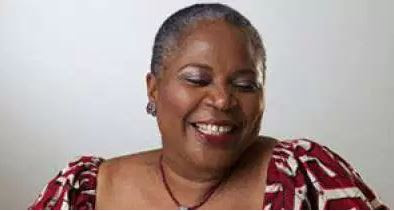 In this post, we take a look at the personal life and career of the Elegant Stallion and many other interesting details about her.

Early Life
Onwenu was born on the 17th of May 1952. She is the youngest daughter of the Nigerian educationist and politician D.K Onwenu. Her father died in an auto-crash when she was still a child.

The musician grew up in Port Harcourt in the ’50s and early ’60s, before the Nigeria/Biafra war

Politics
Onwenu is a member of the People’s Democratic Party and ran for the position of Local Council Chairman of her native Ideato North Local Government Area of Imo State but she got appointed as the chairperson of the Imo State Council for Arts and Culture and she’s the current Executive Director of the National Centre for Women Development.

Education
Onwenu received a BA in International Relations and Communication of the Wellesley College of Massachusetts, USA, and a master’s degree in Media Studies from The New School for Social
Research in New York.
The singer worked for many years at the United Nations in New York before returning to Nigeria in 1980, where she completed the mandatory one-year National Service at the NTA.

While at the NTA, she was known as an articulate and bold reporter. In 1984, she wrote and presented the internationally acclaimed BBC/NTA documentary called Nigeria, A Squandering of Riches. The documentary delved into corruption in Nigeria, as well as the Niger Delta agitation for resource control and campaign against environmental degradation in the oil rich region of Nigeria.

She was also a member of the board at NTA.

Music
Onwenu had been singing with her other as a little child. According to her, it was her mother that taught how to sing.

It was the legendary Sunny Okosun that produced her first album, Endless life. She was signed on to EMI at that time

While at the NTA, Onwenu passion for music culminated in her record an album titled, “For the Love of You”.

She has released five more albums since her debut album. In 1988, she collaborated with King Sunny Ade in the track titled “Mada wolohun” (Let Them Say). The track got a lot of rave reviews when it was released and this led to the duo collaborating once again fro the songs, “Wait for Me” and “Choices.”

She initially started as a secular artist but she has focused primarily on gospel music and societal issues such as health (HIV/AIDS), peace and mutual coexistence, respect for women rights and the plight of children.

Onwenu revealed that during her time, there was a mix of philosophical songs and those that castigated women and this was what influenced her music to always be uplifting.

Onwenu works in partnership with the Paris-based La Cave Musik which is headed by Nigerian cultural entrepreneur Onyeka Nwelue. She is also in collaboration with the UK-based Jungle Entertainment Ventures, headed by musicologist David Evans-Uhegbu.

In 2013, Onwenu became one of the three judges on the Nigerian version of The X Factor.

Recently, it was a show of old vs new when PsQUARE mixed the song into their popular song, Bank Alert.

Awards
Over the years, the Elegant Stallion has been recognized by the music and entertainment industry in Nigeria for her contributions. The likes of Mahmood Ali-Balogun, Laolu Akins, Charles O’Tudor, and former PMAN president Tony Okoroji have being pivotal in celebrating her.

In 2006, she won the African Movie Academy Award for Best Actress in a Supporting Role

Movies
Her acting debut was in the movie, Nightmare. The story was about a childless woman who found an abandoned baby and raised her. It was the movie that shot her in to prominence as an actress.


According to her, she was handpicked by Chimamanda Adichie, the author of Half of a Yellow Sun to play the role of Odenigbo’s mother.
Chain Reaction
Conspiracy
Different World
Every Single Day
Government House
Half of a Yellow Sun
Not Your Wealth
Omalinze
Rising Moon
The Trinity
The Tyrant
To Love an Angel
Women’s Cot

Personal Life
It is said that Onwenu cut her hair low over 40 years ago when she was in school, and has never worn a weave or long hair after that.

The actress has two sons. One of them, Tijani Ogunlende is a graphic designer and photographer. A while back he was at the TEDxJabi in Abuja.

Interestingly, Onwenu revealed that she’s a shy and private person although she states that she’s also confident and self-assured. According to her, she lives the normal life of running the normal errands any ordinary person will do.

Entertainment Industry
When Onwenu began singing, the recording system was analog which meant that a single mistake meant starting all over.

According to Onwenu, there’s a considerable drop in the technical quality of songs recorded in Nigeria as compared to those produced abroad. The singer disclosed that she had to scrap the initial recording of her In the morning light album because of the marked difference in quality when she compared it to the sound from her studio in London.

Onwenu revealed that she once considered leaving the industry not because she wasn’t earning as much as she would love to but because female artistes were often sidelined and disrespected by fans, the press as well as the male practitioners.

As a result, this has led to her interacting with her colleagues on a strictly professional basis in order to prevent any form of familiarity that can led to disrespect.

Business
Onwenu is the owner of the Unity Event Centre in Ikeja GRA.
PMAN/COSON

The musician has always been an active member of PMAN and PMRS where she was involved in sanitizing the music industry with respect piracy, intellectual property and copyright infringement. PMRS has since metamorphosed into COSON.

She slammed the company with N205 million suit at the Lagos High Court. The musician revealed that Iroking profited from the sale of her music. Although, the company initially signed a two year contract but after the period elapsed, the company illegally exploited her intellectual property and denied they were doing so.
Tags : BIOGRAPHIES
Share This :