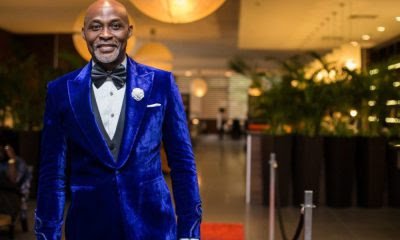 Popularly known as RMD, Richard Mofe-Damijo is one of the veteran Nollywood actors.

He is married to Jumobi Adegbesan and they have 4 children together. In 2009, the actor took a break from acting when he was appointed as the Commissioner for Culture and Tourism in Delta State.

In this post, we take a look at the life of this phenomenal actor and his career as a movie actor and a former Commissioner in his home state.

Early Life
Mofe-Damijo was born in Aladja community of Udu Kingdom in Delta State on the 6th of July 1961. The actor attended Midwest College in Warri and Anglican Grammar School where he was a member of the Drama Club.

Career
RMD starred in the television soap opera, Ripples in the late 80’s called Ripples. The actor worked with the Concord Newspapers and Metro Magazine as a reporter before venturing into acting.

The actor studies Theatre Arts but later went on to become a trained lawyer in 2004 when he graduated from the University of Lagos.

Awards
During the maiden edition of the African Movie Academy Awards in 2005, the actor won the award for Best Actor in a Leading Role.

Political Career
Mofe-Damijo was appointed as the commissioner for Culture and Tourism in Delta State, Nigeria in 2009.

Personal Life
The actor was married to Nigerian journalist and publisher, May Ellen-Ezekiel (MEE). She passed away in 1996. A couple of years later, RMD married the TV personality, Jumobi Adegbesan.

Jumobi was quite popular on TV as she had many admirers and fans due to her TV personality. The wedding took place at the Household of God Church and was presided over by the popular pastor, Rev. Chris Okotie. Jumobi later left TV for business pursuits.

The actor was also nominated for the 2017 Africa Movie Academy Award and the 2017 Nigerian Entertainment Awards.

Rumours
Recently, there were rumours that RMD was having an affair with a young lady. According to the report, the affair had been ongoing for some time but the actor managed to keep it low profile. But it was said that it was an open secret among his close circle of friends and he had told them that he would take her as a second wife.

The actor has since rebuffed the speculations while expressing his discontent and disgust with the news.

Also, the popular Linda Ikeji Blog put up a story where she claimed the actor owned a property in Asaba, Delta which was estimated to be worth N250 million. The actor responds angrily and threatened to sue the blogger. But the duo have since resolved their conflict as the actor recently shared an instagram post in which he praised the blogger’s achievements.

His Wife
RMD’s wife, Jumobi was born on the 27th of January 1972. She celebrated her 46th birthday early this year and her husband celebrated his priced jewel on social media.

The couple got married on the 29th of December, 2000 and their marriage has been blessed with four wonderful children.

Jumobi used to work as a presenter with the Africa Independent Television where she hosted the popular Afternoon show, Lunch Break. She later left the media house to pursue business interest.

RMD has often come on social media to celebrate his wife. He has celebrated several times as his Woman Crush Wednesday.

The actor often calls her names like Adunmaradun (shining black beauty or ebony), Aabike (the one to be taken care of) and Oluwaseunfunmi (God made this one for me).

Despite her husband’s frequent celebrations, Jumobi has managed to avoid the media. According to Jumobi, this is her recipe for marital success.

Law Degree
RMD returned to the University to enrol for a degree in law. According to the actor, his mother had pleaded with him in 1980 to enrol in the university in order to become a lawyer but he had decided to study Theatre Arts instead.

Many years later, the actor finally heeded his mother’s plea and enrolled at the University of Lagos for the Law Degree. He bagged his LLB from the University in 2004 but there was a twist to this story. His mother died before her son became a lawyer.
Tags : BIOGRAPHIES
Share This :