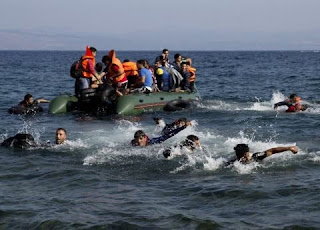 The International Organisation for Migration (IOM) today cionfirms that over 110 people could have died when a migrant boat sank off the Tunisian coast this weekend.

“In addition to 48 bodies which have already been found, there are maybe more than 64 missing,’’ Flavio Di Giacomo, a spokesman for the IOM, said. He added that over 70 migrants survived the accident near the Kerkennah Islands, off the coast of the city of Sfax, on Sunday.

According to the Tunisian Defence Ministry, the victims were mostly Tunisians, but there were also eight foreigners, including from neighbouring Morocco. “Six foreigners, two from the Ivory Coast, two from Cameroon and two from Morocco, were among those rescued,’’ the ministry said.

It added that the boat likely sank because it was overloaded. Meanwhile, rescue operations were suspended when night fell. The Tunisian coast has turned into a lau
Tags : NEWS
Share This :