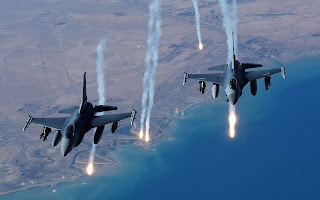 The Nigerian Air Force commenced aerial bombardments on Monday, in a joint military offensive to end the banditry in Zamfara communities.The Commander of the 207 Quick Response Group of the air force, Group Capt. Caleb Olayera, made the disclosure while speaking with newsmen in Gusau.He was speaking after taking delivery of two airplanes deployed for the operation.Olayera described the operation as part of a joint military operation, involving the air force, army, police and civil defence to flush out the bandits.Zamfara in Nigeria’s northwest has seen intense banditry in recent times that has left hundreds dead and displaced thousands in various communities.The Federal Government has since been battling the jihadist Boko Haram group in Nigeria’s northeast in a low intensity war that has claimed thousands of lives and displaced millions since 2009.Olayera said that two helipads had already been constructed by the air force for the Zamfara security operation.“We told you that the helipads will be used as the base for our fighter jets to neutralise any group of criminals and their hideouts,” he said.He assured that peace would soon return to troubled communities in Zamfara with the commencement of the military operation.
Tags : Air Force Begins Bombing Of Bandits In Zamfara
Share This :