Breaking News:
Loading...
Home › ENTERTAINMENT › It’s Getting Too Much!! See What Reekado Banks Experienced In The Hand Of SARS Officials Today

It’s Getting Too Much!! See What Reekado Banks Experienced In The Hand Of SARS Officials Today 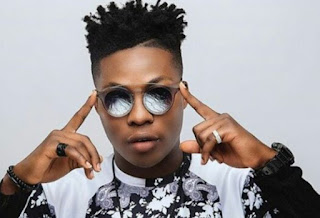 Mavin’s act, Reekado Banks took to Twitter today to call out SARS officers, who according to him are not better than armed robbers.

According to Reekado Banks his claim is backed by an experience he had today. He disclosed that SARS officers who wore no uniform, overtook them in an unofficial car, pointing guns at him and his friends who they ordered to alight from the vehicle. 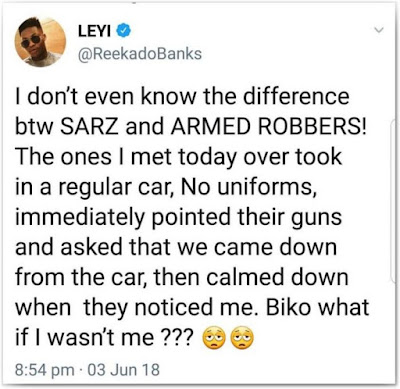 This is coming after Simi who joined the #EndSARS movement months ago, shared an experience she had with SARS officials.

Simi took to her Twitter page to write about how she and some of her friends were almost shot because they were laughing.

Their boss had to talk him down! Pointing a gun at 3 ladies because of your insecurities is incredibly frightening!

Policemen need to be mentally evaluated and checked before being handed guns. And they need to be accountable!! Otherwise, they can get away with anything.

May God help us in this Country!
Do You Think The Government Need To Truly #EndSARS?
What Do You Think Would Have Happened To Reekado Banks And His Friends If He Is Not Identified To Be A Star Musician?
Drop your comments.
Tags : ENTERTAINMENT
Share This :