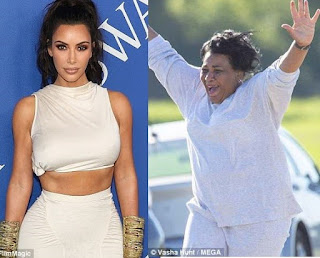 Kim Kardashian will be flying to Memphis, Tennessee for a face-to-face with the commuted convicted Alice Marie Johnson, 63, after her release from prison.

The grandmother who spent the last 21 years of her life in prison for a drug-related crime was pardoned and set free by Trump after Kim Kardashian spoke with the U.S. President, pleading with him to commute her sentence.

Speaking to Good Morning America on June 7, Johnson said: 'When Kim told me that I was being released, I started jumping and screaming and crying, and everyone else was crying.'

'It was wonderful. I'm so glad that she was the one who was able to deliver the news to me. It was a perfect ending.'

Alice who has since returned to her family will appear with Kim Kardashian on NBC's Today show on Thursday, June 14, 2018, according to UsWeekly.
Tags : NEWS
Share This :