Mikel Obi Reveals What Super Eagles Will Do To Czech Republic 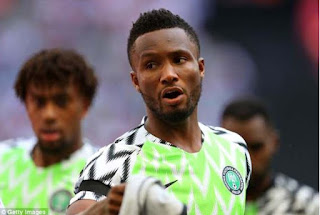 Super Eagles captain, John Obi Mikel has vowed that Gernot Rohr’s men will give their best to get a good result against Czech Republic in Wednesday’s pre-World Cup friendly at Rudolf-Tonn-Stadion Stadium in Austria.
The former Chelsea midfielder, however, said Rohr’s side will avoid repeating the same mistakes that contributed to their 2-1 loss to England on Saturday when they face Czech.

Eagles conceded two goals from Gary Cahill and Harry Kane in the first half before responding with an Alex Iwobi strike after the break as the Three Lions defeated the three times African champions in front of their home fans last weekend.

”The game against England was a good test for us, we played well in the second half,” Mikel said in an interview with the Nigerian Federation.

”First half we didn’t get going but second half we started playing. We scored the goal and created more chances to win the game.

”Hopefully, tomorrow we can start well and get a good result against Cezch. I urge Nigerians to keep supporting us.”

After the game against Czech, Nigeria will head out to Russia to begin their 2018 FIFA World Cup campaign underway in less than two weeks.
Tags : SPORTS
Share This :