Breaking News:
Loading...
Home › NEWS › “Na You Be The Problem Of Nigeria” – Eedris Abdulkareem Says In ‘Letter To Obasanjo’ 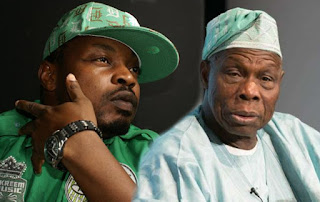 Eedris accused Obasanjo of massive corruption and killing the people of Odi unjustly.

Obasanjo and Eedris first had their face off in 2004 when the rapper released a song titled ‘Nigeria Jaga Jaga’.

Eedris has however vowed to release Nigeria Jaga Jaga (Part 2) in the coming weeks.

When LIB reached out to Eedris Abdulkareem, here is what he said:-

‘Obasanjo served has a military president and also a civilian president he had the opportunity to correct the wrongs in Nigeria but he became a dictator that privatised and sold all national properties and monument that belong to Nigeria to himself and his partners in crime.

He was selfish and wanted third term by all means so he killed democracy and rule if law. His administration recorded too much killings and assassinations. He’s very selfish and wanted to rule nigeria forever’.
Eedris added that, ‘Obasanjo is the king of corruption, remember operation feed the nation belonged to Nigeria but he sold it off to himself. Where is Nitel and Nigerian Airways? Trust me he has all the answers’.
What Do You Guys Have To Say About Eedris Abdulkareem’s Comment?
Drop your comments.
Tags : NEWS
Share This :