Serial Rapist Bites His 3-Year-Old Victim After Being Caught 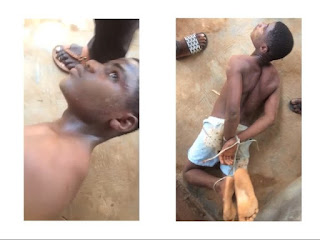 A serial rapist has been arrested, following his fresh attempt to defile a 3 years old girl along AIT road, Alagbado, Lagos

The 18-year-old suspect identified as Dare, was caught in the act yesterday and he bit the little girl upon been caught by the mother. When asked by he bit and attempted to rape the girl, he blamed the devil.

According to reports, Dare raped a 7-year-old recently, but narrowly escaped upon being caught. He came back again yesterday to rape another little girl, before meeting his Waterloo. He was later handed over to the police after a thorough beating.
Tags : NEWS
Share This :