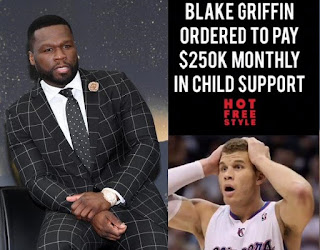 Rapper, 50 Cent has taken to Instagram to react to the outrageous $258k monthly in child support payment NBA star Blake Griffin, 29, was ordered to pay his ex-fiancee, actress Brynn Cameron, 32.
In a court document obtained by RadarOnline.com, it was claimed in the civil suit that Blake Griffin will give Cameron a whopping $258,000 every month in financial support for their two children, Ford, 5, and Finn, 2.

The pair have been battling in court over a nasty paternity case and a separate civil suit where Cameron claimed the NBA star broke off their engagement shortly after he started dating Kendall Jenner when he was still part of the Los Angeles Clippers.

This means Griffin whose annual income totals to $35 million will pay his ex-fiancee $3 million every year.

According to the documents, both sides who have joint custody of their children were ordered in July to "mutually agree" on school expenses, but the Pistons star would be responsible for extracurricular activities.


'I was spending a half a million a year before she went crazy, and I had to get rid of the girl but 250 a month ?what the f**k is wrong with these people. ??‍??get the strap'
Tags : NEWS
Share This :