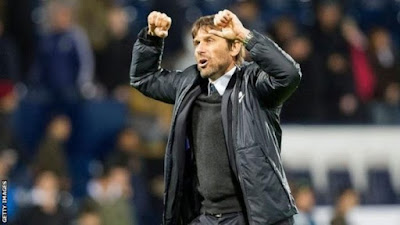 Ex-Arsenal star, Ian Wright has warned Chelsea that they may be unable to lure the best managers in the world to the club if they part ways with coach Antonio Conte this summer. DAILY POST recalls that Juventus manager, Massimiliano Allegri is ready to leave Italy and replace his countryman, Antonio Conte at Chelsea.
Wright noted that the Premier League champions could find it hard to bring in a big manager to the club if the Blues owner, Roman Abramovich eventually sacks Conte at the end of the season.
“It remains one of the game’s most glamorous jobs. But if probably when Antonio Conte leaves Stamford Bridge at the end of the season, the Chelsea hot-seat is also in big danger of being an appointment far from the no-brainer it once was,” Wright told The Sun, UK.
“Chelsea will still be in the mix for the major trophies every couple of seasons or so. Yet I honestly believe that when club owner Roman Abramovich is scouring the world for his next manager, he may find the goalposts have moved somewhat.
“So much so that he may have to look at those bosses just below the top level, not the marquee names who were previously so easy to attract.
“The reason? Well that has to be down to the attitude of the power brokers at Stamford Bridge and how they run the club.
“It is going to be an interesting summer in west London and the likelihood of no Champions League football won’t make it any easier to attract people, believe me.
“Conte himself won’t struggle for another club because he HAS won the title, because he has a great CV and because of the very nature of how things work at Chelsea.
“Yet anyone seeking his opinion before deciding whether to add their name to that ever-growing list will hardly get the most glittering reference.
“The top brass at Stamford Bridge can blame nobody else for that but themselves.
Tags : SPORTS
Share This :