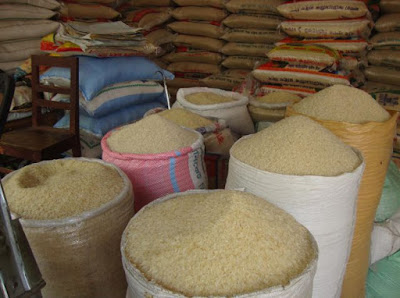 The Federal Government is to initiate an awareness campaign to sensitise Nigerians on inherent dangers in consuming imported rice, and accused neighbouring Benin Republic and Cameroon of making policies to undermine the country’s rice revolution. Speaking at a briefing in Lagos, weekend, where he paraded the administration’s successes in agriculture, the Minister of Information and Culture, Alhaji Lai Mohammed, said six million more Nigerians had started rice farming since the advent of Muhammadu Buhari’s administration.

The increase in rice production, he said, had in the last three years created thousands of jobs in direct and indirect jobs, with N250 billion in investments expected to boost the country’s rice milling capacity in the year.
Bags of rice Noting that Nigeria was on the way towards self-sufficiency in rice production by 2020, the minister, nevertheless, expressed concern that foreign rice producing nations, aided by Benin, were undermining the plans of the Federal Government.

Appeals for local patronage Continuing, the minister said: “We want to use this opportunity to appeal to Nigerians to complement the efforts of the government by consuming only locally-grown and processed rice. It is fresher. It is tastier. It is healthier. It has not spent months on the high seas and warehouses.
“We don’t know where or how imported rice is made or how old it is. It is reported that most of the rice dumped on us are old and probably rejects. “The citizens of those countries do not eat this rice. The citizens of Benin also do not eat it. But they send it to us.

Unhealthy foods are dangerous to health. So let’s eat what we can vouch for.” … on economic importance Also speaking on the economic importance of eating local rice, the minister said: “But Nigerians should remember that every time they eat imported rice, they are eating the jobs that would have been created for Nigerians and instead funding the creation of jobs in the source countries.

“Just imagine that less than three years into the rice revolution, millions of jobs have been created in the whole value chain. “It is important for Nigerians to know that when they consume imported rice, they are creating jobs in India and Thailand and destroying jobs across our country. Today we have rice farmers in all states and all geopolitical zones.

“In fact, most of us have friends and relatives who are farming rice. So if we don’t patronise their product, we are destroying their livelihoods. “We are embarking on a massive nationwide campaign to sensitise our compatriots to the need to support the rice revolution by consuming local rice. Nigerians are patriots.
They want more jobs. “They will support the rice revolution and Nigeria will become self-sufficient in rice sooner than we have stated.

Fall in importation, smuggling On the how the rice revolution has affected importation, Mohammed said: “Within two years, rice importation from Thailand fell from 644,131 Metric Tons (in September 2015) to 20,000 MT (in September 2017). “That’s over 90 percent drop. Let me put things in perspective.
So far, less than 100 billion Naira has been spent on the Anchor Borrowers’ Programme that has achieved so much.” Lamenting the impact of rice smuggling on the country, he said: “The total demand for white rice (white rice is consumed in Benin, against parboiled rice in Nigeria) is 400,000 MT. Yet the country, with a population of about 11 million, imports between one million and 1.2 million MT of rice annually. Who are they importing for? Nigerians, of course.

“In fact, as Nigeria’s rice import falls, Benin’s rice import increases. Most of the parboiled rice imported by Benin eventually lands in Nigeria through smuggling. “Both Cameroon and Benin Republics have lowered tariff payable on rice to zero and five percent, respectively, to encourage importation and subsequent smuggling of the product into Nigeria.” “At present, smuggled rice costs between N11,000 and N13,000 per 50kg bag.
Nigerian processed rice sells for between N14,500 and N15,000 per 50kg bag. “Smuggled rice is sourced mainly from Thailand and India— both countries give a high level of subsidies to rice farmers and rice processors.”