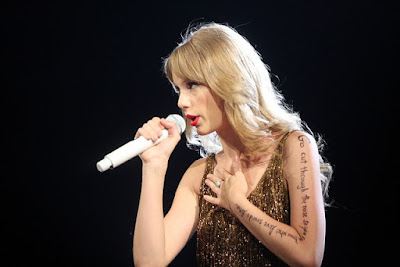 American singer-songwriter Taylor Swift is one of the brightest stars in the music industry today. She is a multi-awarded recording and performing artist who continues to make history though achieving various recognition and outstanding album sales not just in the US but also worldwide. Taylor Swift songs never fail to climb up charts. In 2010, she was the youngest artist in the history of the Grammy Awards to win the Album of the Year award. She was 20 years old then.
Taylor Alison Swift was born in December 13, 1989. She was raised as a child in Wyomissing, Pennsylvania. When she was a teenager, her family moved to Nashville, Tennessee, where she started her career as a country music singer. The road to fame and success was not an easy one, though.
Swift was 11 years old when she started aiming to impress various music companies. She received mostly rejections at first after sending out a number of demos to different record labels. When she was 12 years old, she wrote her first ever song ‘Lucky You’ after meeting a computer repairman who can play the guitar on three cords.
At age 15 years old, Swift entered a development agreement with RCA Records, which gave her the opportunity to get into songwriting sessions with seasoned Music Row songwriters. She left the recording company after being told to record other songwriters’ songs. She was promised an album when she gets 18 years old. But the headstrong young girl was confident she could already release her own album containing her own material.
In 2005, she met and impressed Dreamworks Records executive Scott Borchetta. She signed a recording deal with Big Machine Records, where she emerged as among the new label’s first recording artists. After taking an internship as an artist escort at CMA Music Festival, she began working on her debut album.
In 2006, she released her eponymous self-titled debut album that established her country music stardom. She was also the youngest songwriter hired by Sony/ATV Music. In 2008, she first received her Best New Artist Nomination at the Grammy’s.
Hers was 2009’s best-selling album ‘Fearless,’ her sophomore CD that was released in 2008. It propelled her to a pop crossover success through unforgettable Taylor Swift songs like ‘You Belong with Me’ and ‘Love Story.’ At the same time, she embarked in an extensive concert tour. The album was not just a commercial success. It also generated various praises and good reviews even from the staunchest music critics.
In the same year, 2009, she became the first ever country music artist to grab an MTV Video Music Award. She bagged the Best Female Video award for her song ‘You Belong with Me.’ During her acceptance speech, rapper Kanye West interrupted her. It was a controversy that was blown out of proportion by the media but was carefully and wisely handled by Swift. That incident, according to insiders, buoyed her to become a true mainstream celebrity.
Her third album ‘Speak Now’ did not pale in comparison. The CD continued her winning streak. After selling more than a million copies during its first week of release in the US and adding up several more selections to Taylor Swift songs in playlists, it also led her to a successful album world tour. She bagged two Grammy Awards for her third single from that album ‘Mean.’
Fourth studio album is “Red” that was released on 22 October, 2012 with producers, Dan Wilson, Butch Walkers, Shellback, Max Martin, Jacknife Lee, Dann huff, Nathan Chapman, Scott Borchetta and Jeff Bhasker. Most popular songs from the album are State of Grace, Red, I Knew You Were Trouble, All Too Well, 22, I Almost Do, We Are Never Ever Getting Back Together, Stay Stay Stay, The Last Time, Holy Ground, Sad Beautiful Tragic, The Lucky One, Everything Has Changed, Starlight and Begin Again.
Tags : BIOGRAPHIES
Share This :