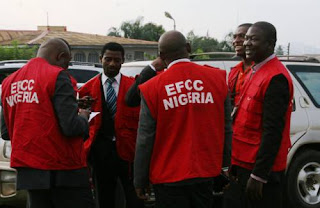 The Nigerian Economic and Financial Crimes Commission, EFCC in collaboration with the American Federal Bureau of Investigation, FBI have raided the bases of different internet fraudster at various locations across Nigeria.
The arrest of the suspects mostly in Lagos, Nigeria’s commercial hub, resulted in the hauling of no fewer than 25 digital devices used in the nefarious activity, Vanguard reports.Among the tools of operations used by the criminally-minded elements, which were retrieved by the anti-graft agencies included mobile phones and computers.The Head of Media and Publicity of the EFCC, Mr. Wilson Uwujaren, who confirmed the raids, said, they were carried out between May 23 and June 7, 2018.Wilson said:“The joint operation was carried out as part of an exercise code named ‘Operation Wire Wire’ following months of surveillance to identify the suspects and their locations.

“The suspects, who are all linked to business email compromise, have made useful statements while documents recovered from them are being analysed".Business email compromise is a sophisticated scam scheme which targets businesses involved with funds transfer as means of payment.The perpetrators routinely compromise communication between the parties and change the bank details of the receiver of funds and send emails to the party expected to do the transfer, purporting to be the genuine receiver with the changed account details.
Tags : NEWS
Share This :