Breaking News:
Loading...
Home › ENTERTAINMENT › If 1 Rapper Is To Represent Nigeria In A Rap Battle, Who Would You Recommend?

If 1 Rapper Is To Represent Nigeria In A Rap Battle, Who Would You Recommend? 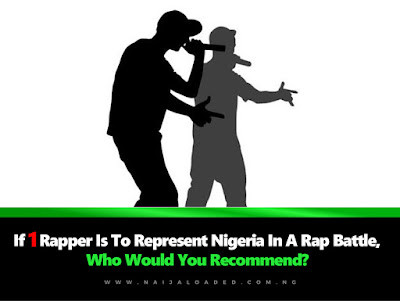 There was a time precisely 6-7 years ago that the rap genre in Nigeria was spammed with a lot of people doing it. Gone are those days. The Rap game is dead 😩

Then, if you can really rap, it was a VVIP entry to the Nigerian Industry. Olamide is a living testimony. Man dropped Eni Duro, and it was straight off to the music Industry.

Eni Duro wasn’t like any song, it was just too spicy. As in “Ota Lenu” 😁 It was nominated for the Best Rap Single and Lyricist On The Roll then.

We also had fire spitting and bars dropping rappers then. Who remember the song “Boys Are Not Smiling?” by Olamide? Ha! Song don finish. Terry Tha Rapman was also one of Africa’s finest then. But sadly, that was then.
Now, if you like, rap like Dagrin, that’s not a guarantee you would excel in the music Industry. Go and ask Davolee or Ola Dips who have tanker loads of punchlines, Where are they? 🤔

But few years ago, when M.I Abaga was still in his prime, man was just too hot for anybody. His singles were just too rich in rap content. His album, MI 2 remain one of the best rap albums in history.

There was even a song Flavour had to croon “African Rapper Number One“, what audacity you would say. But Flavour was right, there was nobody on the African Music Scene that could match the prowess of MI.

Sarkodie was still an apprentice in the game. Cassper Nyovest and AKA were probably still in primary school 😁 Then South Africa was nowhere to be found on the music map.

However, tables have turned. No one is really rapping compared to the days when we had 2Shotz, Ruggedman and illbliss taking shots at each other and dropping mad punchlines 😰😰

What we hear from our rappers now are Love songs and pop singles. Reminisce seems to have ported to the pop genre when he sang Ponmile.

Naeto C‘s star has stopped shining. The young guys don’t really have anything to offer. Wale Turner has been impressive but he will need to do more to further broaden his career.

Dremo has been disappointing in the last few months. He’s an “Ichaba” in the making. Lil Kesh just like Olamide has opted to remain local and has been dropping low grade songs.

Oooh, what about Ice Prince, the heir to M.I‘s throne? We can’t really say if it is the village people following Ice Prince or misfortune of his ex-girlfriend still reeking on him, but he’s currently languishing in the relegation zone together with Jesse Jagz.

We have hundreds of rap artistes in Nigeria Music Industry, we can’t even ignore the ones in the street who slug it out daily in rap battles. The prominent ones in the music Industry now do more of singing than rapping.

Vector with Adura, Reminisce with Ponmile are notable examples. OlaDips, Davolee and CDQ still rap. But theirs are the local ones. Limerick and Otedola crooner, Dice Ailes are few exceptions of rappers who do it decently and are also easily understandable.

We understand they are all good when it comes to Rapping but they all left the Rap game and decided to turn Singer so they can make Money to cater for themselves but you have to choose 1 to represent Nigeria in a Rap Competition.

Now that all our Rappers have turned Singers
If 1 Rapper Is To Represent Nigeria In A Rap Battle, Who Would You Recommend?

Have your say in the comments section.